There are some commands you use so often that you would not think there is room for improvement there. Some time ago, I discovered most, which is a pager meant as a replacement for less (which was already a replacement for more, life is highly cyclic). most is nice because of its sane features and keybindings (where “sane” is a synonym for “emacs-like”) Among other features, it allows to split windows, to scroll horizontally, act as tail and so on. Also, it has a nice ncurses interface that displays useful information and colors. A standard place for most is as the default pager, for example for viewing man pages.

This is what it looks like. Nice isn’t it ? 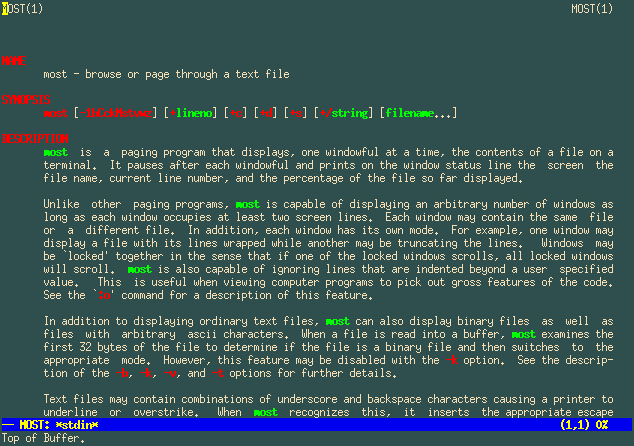 And it allows editing. Well, not directly. Ever wanted to just have a look at a file, yes really, and then oh, if only I could change this line Let’s quit less, and open this file under emacs. Saint Ignucius would probably say I’m not a true believer and that I deserve my fate it I’m not using emacs as a pager, or even better as a shell. But still it happens to me all the time. So, most allows one to define a MOST_EDITOR to be launched when hitting e while viewing a file. Now I have this in my .zshrc :

The expression is a bit more complex than it should be because of a strange limitation : the filename (%s) must be before the line number (%d) in $MOST_EDITOR, which is exactly the contrary of the requirements for using emacs or similar programsAnyway, what this command does is launch emacsclient in the current tty (using the neat multi-tty feature) in order to edit the current file at the current position. In case emacs is not running (which is admittedly rare), we fallback to zile, an emacs-like lightweight editor.